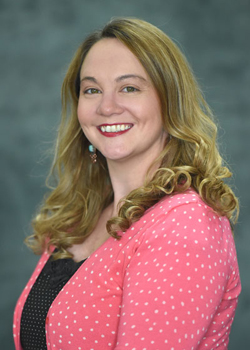 Alexandra Hubbard began her college journey at North Central as a dual enrolled student in her junior year at Alanson high school. She attended Baker College after graduating from high school; however, she graduated with her Associate Degree in 2008 from North Central.

When asked why she choose North Central, Alexandra said “Dual enrollment was a great option for a high schooler. After leaving to attend Baker College, I decided to move home and attend North Central. The affordability for a quality education and to remain in Northern Michigan was a huge draw to me.”

Like many students, Hubbard was not sure what she wanted to study, so she used the resources available at North Central to help guide her. “When I attended NCMC there were great career counselors who were able to help me figure out where I was meant to be and the paths I needed to take to get there. They helped me realize that nothing was impossible, and that NCMC was the base to my future.”

Class size was also an advantage to Alexandra. “I really enjoyed the smaller class sizes. Even when they were ‘larger’ classes, they were not as big as what I experienced when I later went to Grand Valley State University. This allowed me to ask questions easily and often, and all around was a very comfortable situation.”

In 2008, Alexandra Graduated from North Central with her Associate of General Studies Degree. She then went on to Grand Valley State University where she graduated in 2011 with her Bachelor’s of Business Administration Degree, with an emphasis in General Management.

Following graduation, Alexandra had a successful career with Sysco Food Corporation in Grand Rapids for 7 years. She is currently employed at Mitchell Graphics as a Regional Account Manager, and serves as a board member on the Straits Area Community Foundation.

She says of her career path, “My degree at North Central gave me my foundation to go whichever way I wanted to. North Central allowed me to take classes that counted toward my degree that dabbled in multiple industries and fields. It gave me the freedom to really think about whether I wanted to look into a specific industry and check out the career options.”

Alexandra, you are clearly an asset to our community! We are glad you returned to Northern Michigan to share your talents.