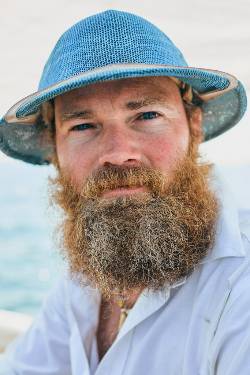 Growing up in Northern Michigan, Jerome Rand had a late start in the world of sailing.  It wasn’t until the age of 18 that sailing became the main focus of his life.  First teaching sailing on the small inland lakes and then venturing out on yacht deliveries from the Caribbean to the Mediterranean.  On one trip to the BVI he was introduced to the Bitter End Yacht Club and found himself working with the watersports center for the next 9 years.

It was during the last three years at BEYC that the pieces of a long-held dream started to take shape, to sail solo and nonstop around the world.  On a small budget he purchased a 43 year old Westsail 32 and began the journey of a lifetime.  The first year was spent fixing, breaking and fixing again anything that might be a weak point on the boat.  In June of 2017 the boat, “Mighty Sparrow” was hauled out of the water and work began making modifications to endure the long trip ahead.

In October the boat was back in the water and weather window opened up to set out from Gloucester Massachusetts following a few nervous weeks watching hurricane Irma, Maria and then Jose storm through the Atlantic.  On October 3rd Jerome Rand set sail aboard the Mighty Sparrow for what would be a 271 day sail and the adventure of a life time.

To reach home, the boat would have to cross the North Atlantic during the end of Hurricane season then cross the South Atlantic on the way to the stormy seas of the Southern Ocean near the Cape of Good Hope.  From there it was South of Australia, Tasmania, and New Zealand on route to Cape Horn.  Once around the Five Great Capes the boat turned North, heading for warm weather and a friendly ocean.

After two months of retracing the outbound track, on June 30 2018, the Mighty Sparrow sailed into Gloucester Mass after 9 months and 29,805 miles sailed.  The journey tested every limit both mental and physical, from fierce winds to demoralizing calms, and everything in between.  In the end it was perseverance and a bit of luck that would see this small boat through some of the world’s most dangerous seas.