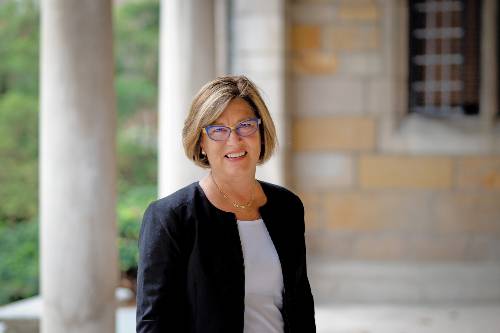 Randel Richner was a rabble-rouser.  She said, “If there’s a rule, there’s a way to get around it.” In reality, she was always motivated by change. Randel “graduated” in 1972 with a combination of credits from Grosse Pointe South High School and night school at Denby in Detroit. “I was a terrible student,” she states.  “A high school counselor who believed in me made it possible for me to make it through.”

After a few years of alternative college and hitchhiking around the country, she moved to Good Hart, lived in a one-room log cabin with no running water, raised chickens, heated with wood, and worked as a waitress at the Crow’s Nest.

So how does a waitress from Good Hart, MI, grow to become one of the leading healthcare policy change agents in the United States?

It began with a change. The first change came when Imogene Gerry, dean of nursing at North Central Michigan College, met Randel when she was working at The Crow’s Nest.  Imogene saw potential in Randel and offered her the opportunity to enroll in the nursing program.  “She decided to invest in me,” remembers Randel. “I think you would make a great nurse,” Imogene said. Randel replied, “Are you kidding me? I barely made it through high school!” Imogene encouraged her and remained her advocate.  “North Central played a tremendous role in my career path,” says Randel.

It was North Central that ignited a passion in nursing.  It wasn’t easy, as nursing was very strict, and Randel struggled with the rules and hated it.  Randel grew to love nursing, as well as the patient interaction and the patient journey.  Graduating in 1978, she practiced at Little Traverse Hospital (now McLaren Northern Michigan Hospital) for 12 years. It was there that she discovered her interest in being an advocate for patients in the health care system. She started working in dialysis, helping to grow a significant home dialysis program for rural northern Michigan.  She loved providing care on the only mobile hemodialysis Greyhound bus in the country, that served patients who had difficulty traveling to the hospital in Petoskey.

Another change happened in 1985, when Randel learned that the University of Michigan was offering a Bachelor of Science in Nursing (BSN) through Northwestern Michigan College.  She took classes on the NMC campus as well as many essential courses at North Central, all while working full-time, traveling the 100 mile distance from Good Hart for school. Randel earned her BSN in 1986.

In 1988, Randel realized how her clinical experience could be channeled to change broad health care policy, affecting thousands of patients rather than one at a time. She left her clinical work as a nurse and enrolled at the School of Public Health at University of Michigan in Ann Arbor.  There she engaged with health care leaders from around the world coming to Michigan for research and policy guidance. “I began discovering how all of my energy, passion and desire to affect change could be channeled,” she said.

Since her graduation in 1990 from the School of Public Health, she has worked at the intersection of health care and policy – from a research role with the Upjohn Company to a policy, health economics role at a Boston-based research firm, to establishing a global corporate function in Health Economics, Reimbursement and Government Affairs at Boston Scientific Corporation.  She worked to shape implementation of the Balanced Budget Act of 1997. “I spent a lot of time with Congress and several administrations in Washington, DC, helping to develop patient-oriented regulations for health care coverage policy to improve access to life-changing technology,” she states.  She was appointed by the Director of the Center for Medicare and Medicaid Services (CMS) to an influential Medicare Coverage Advisory panel as the first industry representative to CMS.

Striking a big personal and professional change, she left the corporate world in 2006, and started her own company, Neocure, a consulting agency that specialized in strategic reimbursement policy and health economics for growing, promising technology and pharmaceutical companies. “My first customer was a startup that became the top home hemodialysis company in the country,” said Randel.  “It took 7 years, but we finally changed a detrimental regulation for home hemodialysis patients changing access to that form of treatment.” Again, her passion about helping patients on dialysis never wavered throughout the many years since Petoskey.

Her advice to students entering nursing or any other program in higher education is, “It is essential to follow your passion.  Don’t ignore what is most important to you personally.  That will drive your success – both personally and professionally.”  She laughs, “There are times you’re going to be unhappy, and you’re just going to have to suffer for awhile.”

In closing, Randel states unequivocally, “Community colleges and those who help you there, will help give you the insights to achieve personal and professional success. Find your inner grit and never let it go.”