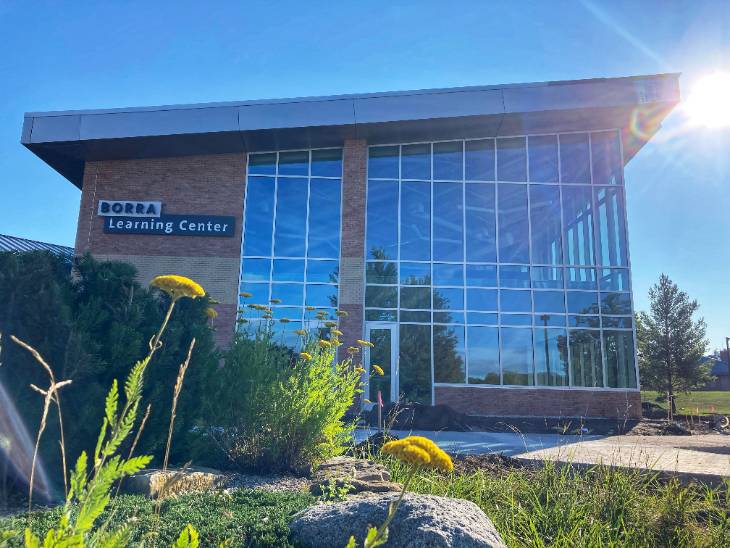 North Central Michigan College will mark the grand opening of its new $7.4 million Borra Learning Center with a public ribbon-cutting and ice cream social on August 19, 2021, from 5 -7 p.m.

PETOSKEY — North Central Michigan College welcomes the community to celebrate its new $7.4 million Borra Learning Center during a ribbon-cutting and ice cream social on Thursday, August 19, at 5 p.m.  Public tours of the building will be available until 7 p.m.  RSVPs are requested at https://northcentralopenhouse.eventbrite.com.

North Central President David Roland Finley said the project is a historic renovation and addition to one of the busiest buildings on the college’s Petoskey campus.

“Since the building opened in 1967, thousands of students have passed through its doors on their way to an associate degree and the next step of their career or college journey,” Finley said.  “Now the Borra Learning Center is beautifully equipped to better prepare future generations of students for success in a technology-driven world.”

Named for lead donors Pier C. and Renee A. Borra, the Borra Learning Center is part of a $9.9 million campus enhancement project known as the Building Tomorrow Together campaign.  The project was funded by a capital outlay from the State of Michigan and investments from North Central’s donor-partners.

“We are providing our neighbors with access to training and experiences that will help them build their careers and thrive as creative thinkers, problem-solvers, and entrepreneurs,” Platte said.  “Working together as a community, we’re unlocking individual potential while increasing our region’s economic resilience.”

More than $1,000 in prizes will be awarded during the August 19 open house event.  Prizes include $50 restaurant gift cards and $50 gift baskets from local shops.

Southfield-based Neumann/Smith Architecture provided design and architectural services for the project, and Lansing-based Clark Construction Company oversaw the building’s construction.  The companies were awarded the project following a competitive bid process and approval by North Central’s Board of Trustees.

North Central Michigan College is an open-door community college based in Petoskey, with additional locations offering classes and services in Cheboygan and Gaylord.  North Central’s mission is to provide exceptional, accessible, relevant higher education of and for the community.  North Central is an Achieving the Dream Leader College with a designation of Veteran Friendly Silver by the Michigan Veterans Affairs Agency.  For more information, visit www.ncmich.edu.