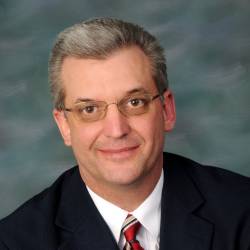 Stephen L. Strom, an engineer and Air Force veteran with more than a decade of experience in academic planning and program development, will serve as the college’s new instructional leader.

North Central Michigan College announced today that Stephen L. Strom, an engineer and Air Force veteran with more than a decade of experience in academic planning and program development, will serve as the college’s new instructional leader.

Strom, who is currently dean of Science, Technology, Engineering and Mathematics (STEM) and Social Sciences at Minnesota’s Inver Hills Community College, will start as North Central’s vice president of Academic Affairs in July, following unanimous approval by the college’s Board of Trustees.

“Dr. Strom’s many accomplishments as an instructional leader and his commitment to collaboration and academic excellence make him an ideal choice for this position,” said North Central President David Roland Finley.  “North Central’s vision to become the premier choice for higher education in Northern Michigan will be strengthened by Dr. Strom’s addition to our team.”

More than 20 candidates applied for the VPAA position, with nine emerging as semifinalists, according to Lynn Eckerle, North Central’s director of Human Resources.  Four finalists participated in on-campus interviews and virtual forums with the North Central community and external stakeholders.

Strom, who is originally from South Carolina, brings more than 15 years of higher education experience from community colleges in Alaska and Minnesota, including experience in continuing and community education, concurrent enrollment and early/middle colleges.

Strom said a passion for community colleges and North Central’s student-centric mission led him to pursue a career in Northern Michigan.

“I believe firmly that the varied missions of a community college are critical to the success of the students and communities we support,” Strom said.  “I am thrilled to bring this passion to North Central as a member of the college’s leadership team.”

Strom holds a Doctor of Philosophy in Community College Leadership (Oregon State University), a Master of Science in Logistics Management (Air Force Institute of Technology), and a bachelor’s degree in in civil engineering (Clemson University).  He retired from the United States Air Force in 2006 with the rank of lieutenant colonel.

North Central’s VPAA position was last held by Provost Pete Olson, who is retiring at the end of June.